December Snow 2008
Photos taken between Sunday the 21st and Tuesday the 23rd in Portland, Oregon

The news people say this was the biggest snowfall in Portland since 1968 or something like that. They are always referencing various records that have been broken; it’s hard to know exactly what each one means, but I can definitely testify that this is the most snow I’ve ever seen in town. The snow storm lasted almost two weeks, I’m pretty sure, and even though it’s raining now when I’m writing this (on the day after Christmas) the snow will certainly stay around for at least a few more days. In fact, I’m sure some of the snow that people or machines have piled up on the sides of roads, driveways and parking lots will still be in evidence two weeks from now. Over the course of the last week or so I took a few photos. Hope you enjoy them. 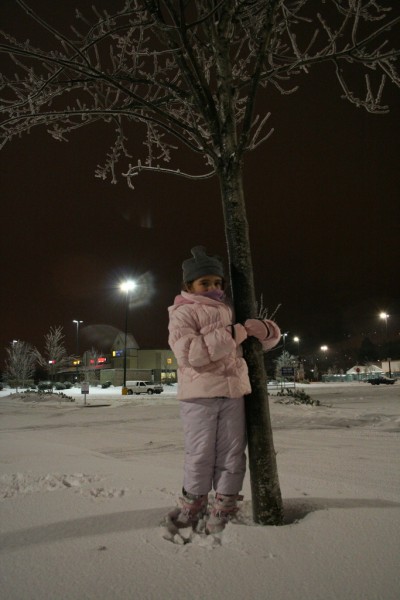 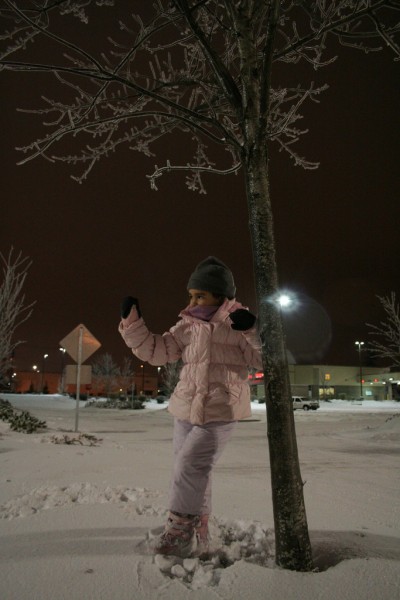 My dad took Tiffany, Shaun and Allie and I out to run some errands on the 21st, and this was in the parking lot of one of the stops while Tiffany and Shaun were shopping.

Allie is waving at Grandpa who is sitting in the Suburban nearby.

One of the days during the storm we got some freezing rain, which makes trees look amazing. There was probably half an inch of ice on the ground above and below thick layers of snow. Allie and I discovered it while we were playing in the parking lot and started to make a little house out of the ice pieces. I should've taken a photo of that, but didn't. So, all you get is the cool lookin' trees.

That's my dad's Suburban that he was sitting in staying somewhat warm while Allie and I played. He was very nice to drive all of us around during the storm.

This was later that night, or rather early the next morning, around 12:30am on the 22nd, looking out at our back patio. These tables and benches became cool visual indicators of how much snow had accumulated each day of the storm.

This is more of the backyard. At the height of the cold probably half of the surface of the pool was frozen, and there was quite a wall of snow all the way around. To the left you can see the scaffolding that is still up next to the back of the addition that i still in process.

I decided to turn the pool light on and take another shot.

This is looking back toward the house from the back yard.

Here's a wider view showing the addition and the scaffolding again.

Here's the front of the house, with baby Jesus completely buried in show and Mary and Joseph pretty well snowed-in.

Look how amazingly different this photo is from the last one. Aren't you glad I added this one as well!?

Most of these photos of the front of the house seem kinda out of focus, but I liked them enough to include them anyway. The smaller versions anyway still look fairly decent.

This little statue is the top of a water fountain near our front steps, and as you can see, the only thing showing above the snow is this little lady. Below her are two pools that the water flows down into. The snow was pretty deep but I think this was the victim of some deeper drifts.

The light here was sadly out of focus, but I like the composition with the light and the manger scene, so I decided to share it anyway. Plus on this one you can see the icicle dripping down from the bottom of the light.

This is from the garage looking over my snow covered car toward the front yard.

This is the big tree across the street. It doesn't look like it has much snow or ice on it, but I think there is more than this shows. It looked pretty cool anyway.

So, when I went to bed after taking that last photo of the tree I thought the weather would be warming up and that would be my last best photos of the snow. Well, the weather people and I were pretty wrong. This was the view the next morning, the 22nd, with way more snow.

Those last few daylight photos I just snapped real quick on my way out to drive around with my dad. Later that night I thought I had better take photos of the back yard as well. There was so much more snow on the tables. It was pretty crazy. The blue tint is coming from this neon thing that is sitting near the window above to the left in the addition.

Mary and Joseph got really buried with the extra snow overnight. Now they have little snowy hats and icicles dangling from their chins. Poor baby Jesus is under half a foot of snow.

The next day, the 23rd, my Dad took my sister and I to work, since we couldn't make it with our cars. Since I had to get up before 6:00am (super early for me!) I didn't have time to make a lunch, so I walked from my office to Taco Del Mar on this nice path that's separated from the road a little ways and took a couple of photos.

I've always thought this little path was really nice. It was fun walking in the snow to lunch and back. I thoroughly enjoyed the snow while it lasted. As I'm writing this the snow is melting away and the roads are pretty clear, which is a relief for most people. I think I'm satisfied with the record-breaking snow, and am ok with standard Oregon rain for a while. After a couple of weeks of wet I'll be ready to go out and find the snow again, this time more likely up in the mountains on snowshoes or cross country skis. :)