Sometime around the beginning of March my friend Tasha suggested the idea of climbing Mt St Helens. I was a little nervous about it–not having done it before and not having much experience on the snow–but I knew it would be amazing, so I asked my friend Troy who has done it many times and he said he’d be up for going and showing us the ropes. He let us know that you have to pay for permits starting April 1st, and that a little while later the permits become limited to 100 people per day. So, we decided to shoot for going before the end of March if the weather cooperated. The second to last weekend of the month was a bit rainy, so we hoped the last weekend would be nice and we were not disappointed.

Given that this would be the first real hike of the season for all of us, we decided to split the approximately 10.5 miles and 5700ish ft of elevation gain into two days and make it a one night backpack trip. So, we drove up on Friday afternoon and set out on the Worm Flows Climbing Route from the Marble Mountain Snow Park around 3 or 4pm. Hope you enjoy the photos! 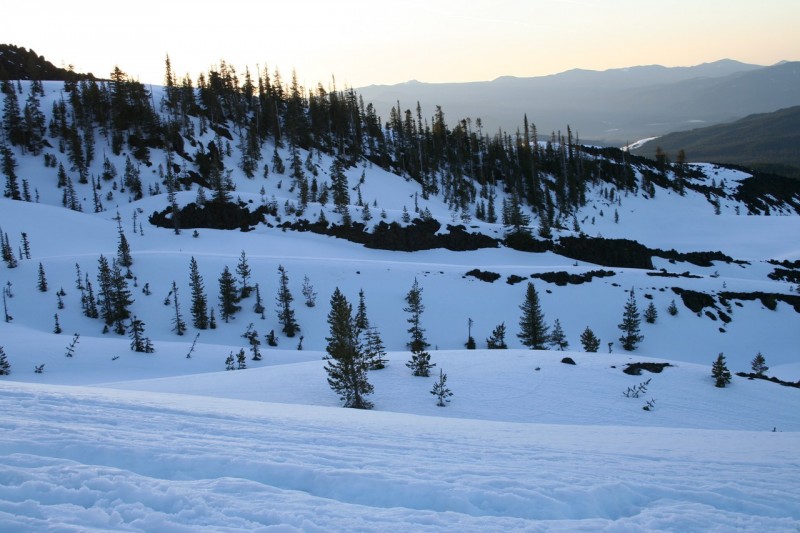 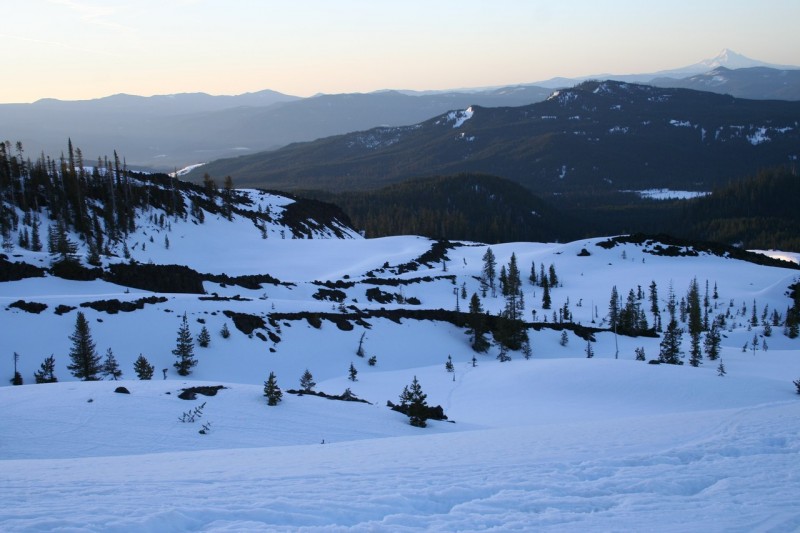 So, on Friday afternoon we hiked in about 3 miles before making camp. The route started out as a relatively wide snow-covered trail through the forest before opening up above the tree line. We were on snow the whole way, but didn't need snowshoes for the first couple of miles until we got out from under the shade of the trees and the snow got softer . My camera was in my pack as we hiked that afternoon and it was getting dark as we set up camp, so these first few photos are of the view that greeted us as we got up on Saturday morning.

You could see Mt Hood on the horizon, almost blending in with the morning sky.

Here's a panorama of the previous set of photos (pardon the missing sections) that captures a little better what the view looking south from our camp site was like. (See a larger version).

Looking north from our campsite we could see our journey for the day and our destination, the still mostly shadowed slopes and bright rim of Mt St Helens. (See a larger version).

We had decided to camp next to this rocky outcropping on a ridge east of the main route most people were taking.

We picked this spot largely because we assumed it would be out of the way of the main flow of people coming up the mountain, but probably around 5am we started hearing the loud crunching footsteps and wide-awake conversations of small hordes of early risers as they trekked through our backyard.

Despite the numerous walking alarm clocks we ended up dragging ourselves out of our sleeping bags quite late by mountain climbing standards at around 7am, I think. The moon was still high in the sky and the sun was coming up from behind the hills.

Since we got up kind of late we tried to make and consume our oatmeal and coffee as quickly as possible, stash our extra stuff inside the tent and head out to try to make it up and back before the snow got too soft. We left our snowshoes behind and that ended up working out just fine. (See a larger version).

Once again I put my inconveniently large camera away while we hiked, but took it out again when we stopped for a snack and water break about half way from our campsite to the summit where we were blessed with a spectacular view of Mt Adams.

The weather was absolutely perfect.

We could see a lot more of the snowy slope of the mountain from this spot. There are a lot of interesting shapes that make up this southern slope. It will be interesting to see what it looks like in the summer when the terrain is not covered with white. (Surprisingly, having lived in Portland all my life, this was my first time climbing St Helens, so I've never been up it except in the snow).

The panoramic view looking south from our rest stop. (See a larger version).

We picked this spot for a rest break because it was relatively flat and because of this section of exposed rocks which made for a nice place to sit for a while.

There were a ton of people on the mountain that day.

Usually I would prefer more solitude, but one nice thing about having quite a few people climbing before you is that they make a well established track, packing down the snow and creating deep boot print stairs to make the going easier. Troy mentioned a couple of times that in the snow you don't want to be the first person heading up and you don't want to be the last one coming down.

Our rest spot was also home to this little solar-powered weather and/or seismic monitoring station (we presume). Quite a few people stopped here with us.

We thought we could see the summit rim from here, but it turned out to be a bit higher than what it looks like it might be in these photos.

A few people photos before we resumed our trek. Tasha and the view looking west-ish from our rest stop.

Me in the same spot. Very much enjoying the trip so far.

Tasha was loving it too.

Ok, enough rest. Time to head for the top.

After a longer-than-it-looked-like trek we arrived at the glorious top. This was the first view I saw... well, besides a big group of hikers and a guy flying a pirate kite! Can't believe I didn't take a photo of that. You could see the rim in the foreground and the eastern side of the mountain to the right with Mt Rainier visible for the first time in the distance. Pretty awesome!

We arrived at the top around where these other hikers are standing and then walked clockwise around the rim for a better view. Notice there are no bootprints near the edge. That's because people generally prefer not falling to their death as the snow cornice collapses beneath them.

From our vantage a little farther west we could see a bit more into the crater. This is the first of a series of photos showing the view from up there.

Until Troy mentioned it on the drive up and until I saw it for the first time from this perspective I didn't realize how completely gone the north side of the mountain is. Crazy.

Here's a panorama of the previous set of photos. (See a larger version).

This set of photos is almost the same as the last, just maybe a slightly different perspective and a tiny bit more zoomed in. In this one you can see the shadow and legs of a tripod another climber was holding. He had the genius idea of using it to lift his camera way above his head and to angle it down to get a better perspective into the crater since you can't get too close to the edge. I'd love to see how his photos turned out. He was kind enough to take a couple shots of the three of us you'll see later.

Here's the panorama of that last set of photos. (See a larger version).

Same view again, just a closer zoom on the eastern part of the mountain and Mt Rainier in the distance.

Tasha wants to do Mt Adams next. Troy said maybe in August or September. Sounds good to me. It's looking mighty beautiful back there.

And, you guessed it, a panoramic view of the last set. (See a larger version).

This was the slightly less spectacular but still pretty neat view looking south, from whence we came.

This panorama didn't turn out too well; the coloring was way different on that first image on the left, so it looks pretty weird, but it still gives you somewhat of an idea of what the view was like. (See a larger version).

As promised, here are the photos the guy with the tripod took for us.

For this one he held my camera above his head trying to get a bit more of the crater in the shot.

At the last minute before we headed back someone pointed out that from a certain spot you could look sharply enough down into the crater to see the dome that is slowly rising in the middle of the crater. You could see a bit of steam coming up on the right, reminding us that we were on top of an active volcano. Pretty cool.

Troy's Facebook profile photo if we can ever convince him to join. (Pretty unlikely).

Troy and Tasha and the southwestern side of the rim.

One last photo of me at the top and we were ready to head down. We ended up glissading most of the way back to our camp which was a ton of fun. Tasha led the way and made good paths for us. Our boots got full of snow, but it was totally worth it. Super fun trip.