I was planning a backpacking trip with my cousin Alicia for the 8th and 9th of October, but due to several unfortunate factors she wasn’t able to do it. Fortunately for me, she happens to work right next to my friend Matt’s best friend Eric. And Matt and Eric happen to be really into backpacking. And they happened to be planning a trip for that same weekend! Crazy coincidence, eh?

So, I ended up Emailing and talking on the phone to Matt and he hooked me up with the trip details. He told me that they were going to be meeting at 8:30am in Cle Elum, WA, which is, unfortunately 4 hours away from Portland, OR, where I live and where I was going to a LA Symphony concert on Friday night! But did having to get up at 4:00am stop me? Matt will tell you I was crazy enough to do it. So, I got up around 4:15 on my second cell phone alarm that I set, and got out of town only a half hour later than I hoped to. I ended up meeting Matt at his parent’s house in Federal Way and we took his mom’s Jeep over to Cle Elum where we met Eric–who had come from Richland, WA that morning as well.

So, I found a coffee shop right away and got a nice mocha to wake me up again–the venti mocha frappuccino I got on the way out of town had just about worn off–and we headed out to the trailhead. The trailhead was just a couple hundred feet from an intersection that split off to two different starting points. One went up three miles or so to Thorp Lake, and the other–the one we chose–went to Thorp Lake the long way around via Little Joe. We parked the Jeep, put on our hiking shoes and set out. I hope you enjoy the photos as well as I enjoyed the scenery. 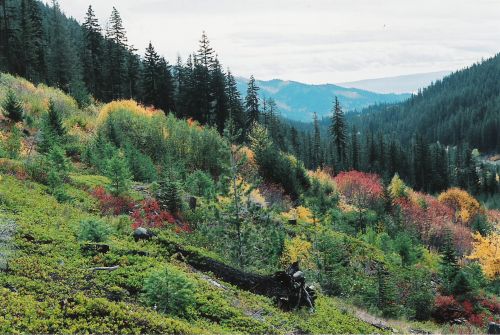 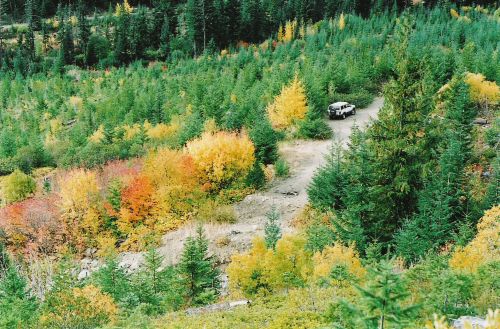 This is the first photo I took in the trip, and it turned out to be one of my favorite ones. It nicely shows the highlight of the hike, which was the beautiful diversity of fall colors. This was about 1 minute into the hike as we began the steep climb that met us right off the bat.

I took this shot of Matt's Mom's Jeep just after I took that first one while Eric was chatting with a couple of hunters who were scoping out the area for the first weekend of bow season.

These guys are my friends Matt and Eric, both of whom are great guys who know a lot more about backpacking than I do. Eric also has quite the knowledge of plant life and so I quizzed him a lot about what plants and flowers we were seeing. I have gotten really interested in that lately. My Grandpa used to tell us about the plants and flowers we saw on the trail and we used to get bored as kids and want to move on. Now I wished I had paid more attention. My Grandpa was the one who got me started on both hiking and photography--he was a great one at both.

This was our first view of Little Joe Lake. It was pretty small and fairly stagnant, as we could see by the nice tea colored (and tea tasting) water that Eric filtered. Eric explained what made that color and taste--the same stuff that makes red wine bitter he said. Never having had red wine, I couldn't relate, but it was interesting nonetheless. He said whatever it was is too small to be filtered out, so even the filtered water tastes a bit like tea.

This is Matt's backpack and the hiking poles he uses during our first water break at Little Joe.

This is one of my favorite photos of the whole set because of the rich colors. This is also Little Joe lake, but the colors are so much different than the first photo. I'm not sure what I did (or what the weather did) to make the difference, but it sure looks nice (I think).

Here's a photo that Eric took of Matt and I in a clearing just after Little Joe.

This is a photo of just one of many steep climbs on the trail, and it shows a little bit of how primitive the trail was. It wasn't one that gets a ton of use. Some areas were really torn up by horses, but it was always very narrow.

This was one of the occasions where we got a nice view of the surrounding hills.

Here's Matt smokin' a pepperoni stick at our lunch break. He and Eric were gracious enough to share their snacks, as I was tired of just Cliff Bars. It's a classic shot, isn't it?

These were the logs we used for benches (and to dry out our stuff) while we ate some lunch. In between and around them are some nice red leaves.

This was our only view of real mountains with snow on them. You can just barely see them sticking out. It was a nice view of the valley below to the right as well.

This photo isn't all that exciting, but I thought I would put it in because it shows Eric's GoLite pack, which Matt referred to as "The Green Bean". It only weighed 20 pounds where mine was pushing 40. I learned quite a few tips from Eric about lightening up my pack.

Again, this isn't be most wonderful photo, but if you look closely you'll see several really bright white areas. This large rock was full of quartz. I thought that was really interesting. I've never seen so much outside of my Grandpa's rock and agate collections.

Three inartistic and uninteresting photos in a row? Yeah, this is just the sign for the trail intersection that told us we were finally approaching Thorp Lake. Also, someone has put a nice chunk of quartz at the base of the sign.

So, probably a half hour or so after we saw that sign we arrived at our campsite by Thorp Lake. This area was obviously used by hunters in the past (and the present) because we found a very nicely equipped campsite with a firepit, logs for benches and firewood already gathered for us. It was pretty luxurious--by far the best equipped site I've camped in on a backpacking trip. It was about 7 miles, we think, from the trailhead.

Man, there sure are a lot of pathetic photos here! Well, this was the only one I had taken that showed our tents. I wish I would have gotten a better one. Anyway, to the left behind Eric is my new tent, the Sierra Designs Hyperlight 3 AST, and to the right is Eric's Tarptent Cloudburst (I think that was the model). Eric's tent was a little cold for the weather this trip, but I was amazed at how much space it provided and how light it was. It uses only two poles and the space inside is as much or more than in my tent. And mine is 6lbs, where his weighs in at only 3! I am thinking of getting one of those for summer hikes, and hikes where the weather isn't as much of an issue.

Here's a shot of our fire pit area. Notice the stools and benches and the nice firepit. You see a glimpse of Thorp Lake in the background.

This is Thorp Lake, with a nice steep rocky slope coming right down to the water. The hills were very steep on all sides but the one we came in on. It was a really nice view.

I thought this shot of logs in Thorp Lake was kinda neat how it's blue on the bottom and green on the top. This was at about 9:00am when the sun was still just barely coming up over the hills around the lake.

This shot is a little overexposed (perhaps very overexposed), but it shows the nice view across the lake.

Eric was kind enough to take another photo of Matt and I in front of Thorp Lake from our campsite. You can see how close to the lake we were. It was a really nice spot.

After we got up and had breakfast, we broke down the camp and headed out so we could all get back home before it was ridiculously late. Here was a typical shot of some of the trail on the way down. These light yellow and tan leaves were very common and made a nice contrast with the dark trail.

This was one of many cool views of the brightly colored leaves along the trail. I wanted to take a lot of photos of the leaves, and I did take quite a few, but I choose just a handfull to put up here to give you all a taste of the nice fall colors.

Some nice bright yellow and red leaves in front of the green and brown in the background.

We saw quite a few of these white flowers during the hike. I'm disappointed that I misjudged the depth of field on this one and got only a couple of the flowers actually in focus. They were sort of toward the end of their season for this year, so they were kind of fading, but if anyone recognizes them I would be curious to have a name to put with the image. I just recently bought a field guide for Western U.S. wildflowers, but I couldn't find anything that matched these--perhaps because they were a bit past their prime blooming season.

Early in the hike we saw many scenes like this, and I found one that came close to how cool the first ones looked near the end with this shot. It is really neat how the nice yellow leaves close to the ground border the dark rocky path.

This is one of my favorites. I couldn't believe how colorful this one scene could be, showing the whole spectrum of the amazing color change. This will probably be one for my desktop on my computer sooner or later.

This beautiful sight greeted us at the very end of the hike. It was the only tree of its kind that we saw, and these blue berries with the beautiful red background were really spectacular. I think this is my favorite shot, and this one is my desktop image on my computer right now. :) This tree was on the road that was the left fork that we took to complete the loop hike and to walk back to the Jeep. It was just a short walk from here. Overall it was a nice hike, a little steep at times, but the fall colors, the seclusion of a relatively low use trail and hanging out with friends was very enjoyable.